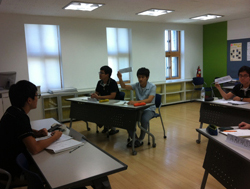 I'm reluctant to read newspapers nowadays because they are full of murder, theft, child abuse and violence every day. All that I read stresses and depresses me. Why are people so cruel, violent and immoral these days?

The ancient Chinese philosopher Mencius said that ordinary people can't have stable morality unless a steady income is ensured. People are becoming more and more immoral because they are having difficulties with their livelihoods. The rich are becoming richer, while the poor are getting poorer.

To illustrate the seriousness of the income inequality problem, I summarized a part of the Global Agenda 2015 of the World Economic Forum.

People, especially the young who are excluded from the mainstream, feel that they have lost their rights, and they are easily caught up in social conflict. This reduces economic sustainability, weakens social cohesion, and in the end undermines our democracy.

To deal with inequality effectively, countries should embrace an integrated agenda which looks at social, economic and environmental problems. The key aspect of these solutions is a basket of interventions that promotes equitable access to resources and services, as well as inclusive growth with decent jobs and stable living conditions for all people within society.

To enhance the solutions' impact, more transparent data is needed to provide support for those who need the most.

Income inequality is most severe in Asia and the United States. But this problem is so widespread that almost every region suffers from it.

We should approach the problem of social injustice in a more fundamental way. The problem of modern economies is that they ignore the pain of the people.

Nowadays inequality is the consequence of this thinking.

What is social justice? I believe that social justice is realized when every member of society has liberty and equality, and is assured of human dignity.

One way to reach social justice is through welfare capitalism.

As Mencius said, people can't have stable morality if they are not assured of a stable income. Welfare capitalism guarantees liberty as well as welfare for a decent living.

This liberty is more complete compared with that of neo-liberalistic capitalism because it is based on human dignity.

But inequality is justified only when basic income and equality of opportunity are ensured to everyone.